– bears witness and experiments with an expanded field of drawing

– situates itself across analogue and digital forms of practice and

before close-open there were

my digital sketchbook on IG

more kaleidoscopes
heating/brambles
then the handle i had drawn shortly before turns hesitantly, insecurely. eventually, it opened
unwritten

This post concerns the latter and presents a draft idea for a self-print zine, folding instruction (1 page A4, double-sided) and an invitation to a little hide and seek investigation, and potential follow-up.

The idea is to make a single, two-sided zine for participants to print out and fold and to investigate their familiar surroundings to find some locations, to record some associations and to invite to show/share with me.

It follows ideas around un/familiar in day-to-day spaces and ideas of escapes or stepping into elsewhere (though one of the images currently doesn’t offer an escape, but literally, warmth).

The zine construction is as follows: 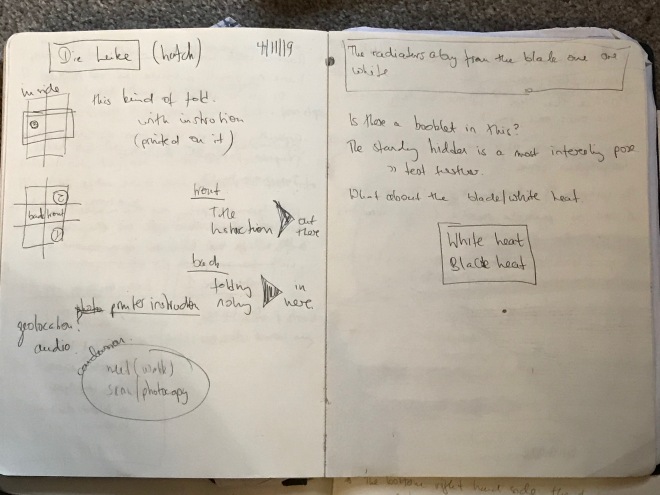 The images I want to use are either drawn/photographs (and possibly overlaid on previously photocopied templates): 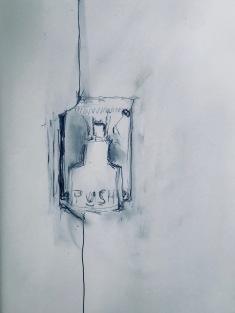 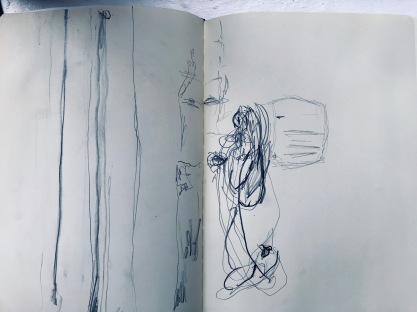 The instruction would be simple:

(as a placeholder in advance of Research tutorial 1).

— the piece of previous work that I have spent most time with over the past four weeks is the final work produced during Digital Image & Culture: the line, which I finalised as a tumblr site, and am currently in the process of re-publishing through facebook as a public album.

The line is also the piece on which my submission to the Walking Arts Network conference in Prespes, Greece, is based. So I am currently also in the process of writing a 3-4k word contribution for a conference publication as well as considering how it will present as a 15-min talk/presentation.

As part of the re-publishing process I am keeping an offline journal which I will move here at some point. There are some thoughts I have here right now in terms of how to proceed (and what can become part of Res or BoW and what is best kept aside).

Here some notes from this morning:

I have the strong sense that the line is crucial for moving forward. I want to test some of that with Rachael in our first tutorial today.
There is much in here that is definitely about near space: about relational concepts and about performance.
The performance is in my voice but also in the conceal/reveal that is taking place
The current re-publishing through FB (as suggested at assessment) is testing some of that but also any relationship between audience and work/.

i sit on the floor on the other side of the room: the centre of my body centred on the space between the two cabinets, black dress, leggings and shoes. my legs are crossed at my ankles. i breathe in, uncross my legs, sit them down, then cross them again. — end.

– this is observed by one person. from a number of positions and heights. first: behind the desk, seated; then, standing between desk and cabinets, leaning on them; standing right in front of the gap, facing me directly; then at the same location, kneeling down; sitting to the right or left of me, legs similarly stretched out; finally: standing in the doorframe, the door is ajar, my legs are visible but not the rest of me. the person moves slowly from position to position.

this happens without speaking. what the observer observes is up to them.

The map on spatial praxis leads to a series of earlier sketches/notes that seem relevant.

Notably: it is the idea that the image plane folds upwards and allows us to crawl into the space between the two filing cabinets of the Gap:

1. the after dinner mints fold into shapes, c 2010 on a lunch time date with my parents and my grandfather. Just before I had seen Bethan Huws’ work in Hanover.

2. Placeholder 3(a) and 3(b) [Cairn], 2013 : part of a body of work that tried to get at notions of place and movement in Northwest Iceland and memory thereof. It is part performance, part lens-based work: I lie down on my living room floor as if I had crouched into a half-ruined cairn on a plateau that we encountered a couple of months earlier.

3. chestnut buds that I construct our of masking tape and suspend in front of a large print and cut-out.

>> the question in all of these is of scale and position of body towards that scale. Of radically altering scale and thus a cave becomes a little handheld object. Bethan Huws’ show consisted largely of a set of ready-mades, bottle holders if I remember correctly, which appeared christmas tree like and we would walk through them. the tinfoil shapes on a dirty table cloth resonated with those. (there is a text I wrote on the Huws show in my previous blog here)

I also think of Leykauf’s Spanische Wand of photograph/installation (see link on DI&C blog here) and a number of other photography, print installations and illusions that play with these forms of a perception, stand-in and scale shift to become performative, iterative and perhaps as much surreal as utopian.

I am also thinking about loosely folded paper planes and shapes, arranged in a number of configurations. I begin to play a little in my sketchbook: